We Had Our Meeting With The City, Now What?

The public meeting my neighbors and I requested to express our concerns about the proposed Alki 11 rowhouse project was held last Wednesday, July 17. We had a good turnout - my guess is between 50 and 60 people. This was a SEPA meeting and we were directed to offer comments on environmental issues only.

Initially, 12 people signed up to speak, but as the meeting went on, a few more signed in and spoke. Close to 20 people had their say. Topics included those covered on this blog: lack of stormwater mitigation, more cars parked on the street, more congestion, inadequate infrastructure to handle all the waste and stormwater, the potential for flooding,  and contributing to sewage overflows into Puget Sound. Older residents who have lived here for many years, some whose family has had property here for generations, talked about how this project fails to consider the character of the neighborhood. Several people reviewed the developers SEPA checklist and pointed out inaccuracies and incomplete answers. Others lamented the loss of wildlife habitat, challenging the developer's statement that there is no wildlife present in this area. Lack of green space, and blocking light and air for neighboring properties was mentioned, as was the lack of transit options available here. Between the oral and written comments, I believe we explained the negative environmental impacts pretty thoroughly.

The meeting organizer and Department of Planning and Development (DPD) planner in charge of this project, Tami Garrett, said that she would be reviewing all of our comments, along with the reviews still to be completed by other planners, before writing her decision. She will accept written comments for about one more week. If you have anything you would like to submit, email it to her at tami.garrett@seattle.gov. Obviously, the sooner she gets comments the better.

She will write her decision, it will be reviewed by her supervisor, and then it will be published. She expects this to be done within the next two months. After the decision is published, the neighbors will have two weeks to appeal the decision if we aren't happy with it.

The mood as we left the meeting was subdued. We get it. There's not much the DPD can do for us. They don't make policy or write ordinances, their job is simply to enforce the rules. The rules are made by the city council, with input from the mayor.

Since the meeting, several neighbors have written to Richard Conlin, the city council member who chairs the Planning, Land Use and Sustainability Committee. He has agreed to look at how the zoning evolved that could allow this project to happen. But he says there's nothing he can do about this now. Here's a quote from one of his emails:


"I am trying to be really, really clear on the permitting process. The Council cannot legally take any action that will affect a permit that has been filed with DPD. There is no action that we can take that will affect or stop the project you are concerned about. Only DPD has the authority to do that.

If, in reviewing the zoning, there is a case for changing it, that could apply to prospective projects in the future, but it cannot be applied retroactively."

So there you have it, the DPD punts to the City Council and the Council punts the issue back to the DPD. In the meantime, projects like the Alki rowhouses and other egregious developments are sprouting up all around us. At some point, city officials may see that mistakes were made and change the rules, but for now, these projects are going to get built. Once they're here, they're here to stay - for decades - along with the problems they spawn. There has to be a better way to manage growth and development in Seattle.

What Does SEPA Mean, Anyway?

The Environmental Impacts of the Alki 11 Rowhouses

What Does "SEPA" Mean, Anyway?

This question has come up often when neighbors have been discussing the Alki 11 review process. We were told that the project was under SEPA review; that the developer had filled out a SEPA checklist; that the meeting the city was granting us was called a SEPA meeting. But what the heck was SEPA?

Here is the definition, taken from the first paragraph of the City of Seattle's Department of Planning and Development's SEPA Checklist. Developers have to fill one of these out as part of the permitting process.


"The State Environmental Policy Act (SEPA), Chapter 43.21 RCW, requires all governmental agencies to consider the environmental impacts of a proposal before making decisions. An environmental impact statement (EIS) must be prepared for all proposals with probable significant adverse impacts on the quality of the environment. The purpose of this checklist is to provide information to help you and the agency identify impacts from your proposal (and to reduce or avoid impacts from your proposal, if it can be done) and to help the agency decide whether an EIS is required."

Prior to our public meeting last Wednesday, several neighbors reviewed the SEPA checklist the Alki 11 developer filed with the city. They found inaccuracies and incomplete responses which they have addressed in both written comments and in their oral comments at the meeting.

If a project in your neighborhood is under SEPA review, this is what it is all about. To access the developer's checklist for that project, follow the instructions here. Fill in the project's Master Use Project (MUP) number. When the records come up, scroll down to find the SEPA checklist.

How To Access Permit and Property Records for Seattle Development Projects

The Environmental Impacts of the Alki 11 Row Houses

Will the Alki 11 Row Houses Cause Flooding?

Posted by Marie McKinsey at 1:44:00 PM Links to this post

The Sustainable Alternative to the Alki 11

"It is better to light a single candle, than to curse the darkness." -- Eleanor Roosevelt

I've pointed out numerous problems with the proposed Alki 11 rowhouse development. Question is: How could I do it better?

I've been thinking about that since the DPD's land use sign first went up in front of the property. And I've come up with a simple plan that takes into consideration what neighbors have said they want to see. It also offers a reasonable increase in population density without compromising the environment. We don't have to trade one for the other. I've highlighted in green type the features of this design that would be an improvement environmentally over the existing rental houses, showing that development can improve, not degrade the environment. 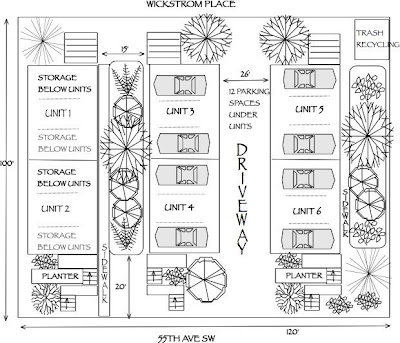 Here are the main features:


The drawing below shows how access to the parking area would work coming in from the 55th Ave side. The same configuration would be used on the Wickstrom end.

This drawing shows a cross section of one of the bioswales and one side of the parking area. 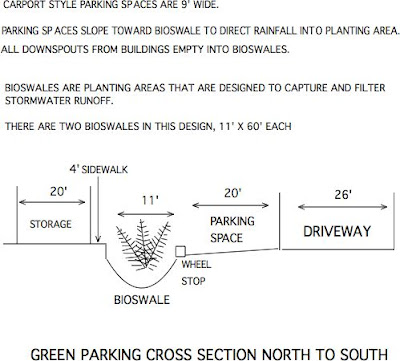 This beautiful rendering, drawn by my talented neighbor, Lynn Shimamoto, shows how this plan for higher density, sustainable housing might look.  I don't expect for a moment that the developer of the proposed Alki 11 rowhouses will adopt this plan or even take the time to read this post. But I have very much enjoyed thinking about how this could work, taking into the consideration the neighborhood, the need to make better use of the land we have and the need to protect the environment that we so appreciate and enjoy at Alki Beach.

Posted by Marie McKinsey at 4:36:00 PM Links to this post