It is hard to believe that a decade has passed since the events of 9/11/2001. And yet, here we are. Today I went through photos that I took of the Alki memorial back then, and reflected on life since. Of the many things that have come out of that difficult time, perhaps the most positive has been a renewed sense that we are all in this together; that life is unpredictable; and that family, friends and neighbors are what matters. The phrase "building community" seems to echo across the country. 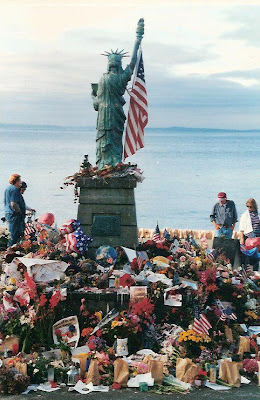 Here at Alki, that sense of community rose up spontaneously on 9/11. The news seemed, at first, bewildering. Did this really happen? For some of us, the Orson Welles/War of the Worlds story came to mind. But this wasn't fiction. And as the reality of it sank in, whatever else we were doing seemed unimportant. It was as if we were all wondering, "well, what do we do now?"
And so we came to the beach. As Isak Dinesen said, "The cure for anything is salt water - sweat, tears or the sea." Walking along the water's edge is soothing in a way that nothing else is. As we walked, our little Statue of Liberty seemed the natural destination. 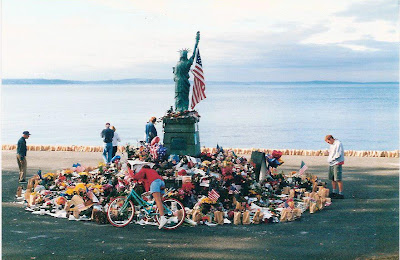 As people came, they brought candles, flowers, hand-written notes, teddy bears, and personal mementos that related somehow to the events or people they knew. For days, candles remained lit - when they burned down, people brought new ones. Wilted flowers were replaced with fresh ones.
Someone brought a supply of brown paper lunch sacks and sharpie pens, and encouraged people to take a bag and write a message on the side. Volunteers then took the bags, put a bit of sand in the bottom of each one to weigh it down, and placed votive candles inside. At night the candles were lit. In the photo above, you can see the row of bags in along the seawall.
As the days went by, the flags, hats, notes and other memorabilia just kept coming. When the memorial wound down days later, the nearby Log House Museum collected something like 18 boxes of these treasures which they are preserving as part of local history. 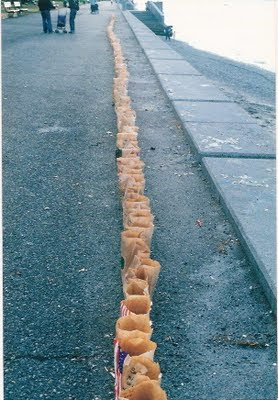 Here are a few of the messages on the bags.
There was, of course, no formal program or agenda. During the day, people were quiet, either reading what others had written or lost in their own thoughts. At night, I remember that we held lit candles and sang a few songs. Some people read poems. What I remember most, though, was feeling grateful for my life and for the connection I felt with the people around me. 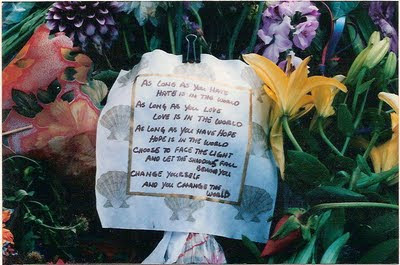 There were many touching notes in the collection at the base of the statue. But this one stood out for me. In fact, I made copies of this photo and used them to make my holiday cards that year. Here's what it says:


A special exhibit will be held at the Log House Museum on Sunday, September 11. For more information about observances planned in the neighborhood, visit the West Seattle Blog.
Posted by Marie McKinsey at 6:21:00 PM