The Seafair Pirates landed at Alki Beach recently, marking the beginning of Seattle's month-long Seafair celebration. While pirate invasions are not considered a good thing in other parts of the world, here it is an eagerly awaited event, for children especially. 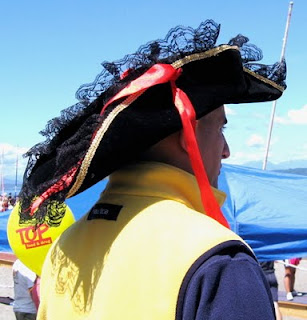 Folks around here dress up for this event in traditional Northwest garb. This man sports a pirate hat and, of course, a fleece vest. 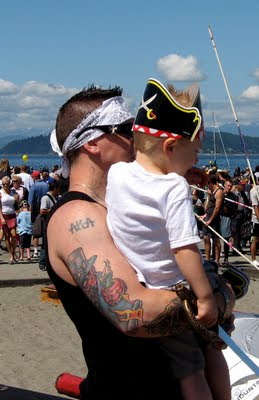 Here one of the littlest pirate fans gets a boost from Dad to watch for the pirate ship. 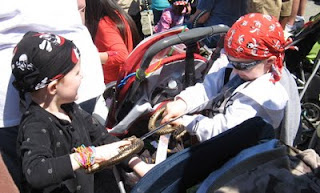 Even though it seemed to take a long time for the ship to get here, there was plenty to do in the meantime - like have a sword fight. 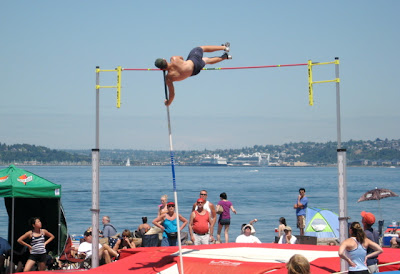 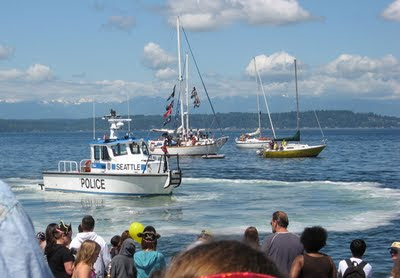 Seattle is a big time, maritime city and this is a perfect Seafair event to show that off. Here among the sailboats is a police boat that just "did a donut" in front of the crowd. (See the circular wake?) 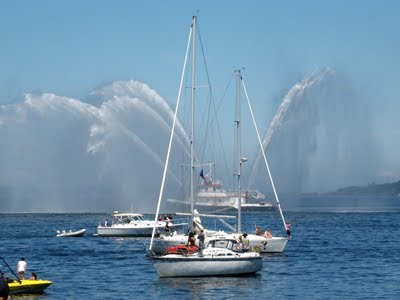 In the background, the fire boat demonstrates waterworks. 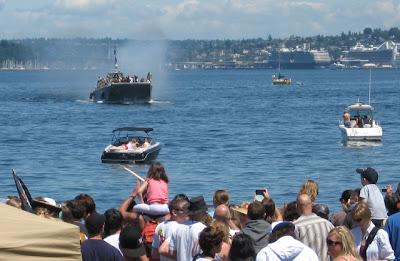 Then, at last! The pirate boat approaches, in a cloud of smoke from canon fire (or something like it). 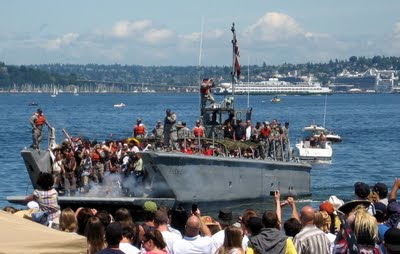 Within minutes, the boat reaches shore, lowering its ramp amid a flurry of fireworks. The crowd moves aside as the Seafair Pirates storm the shore! 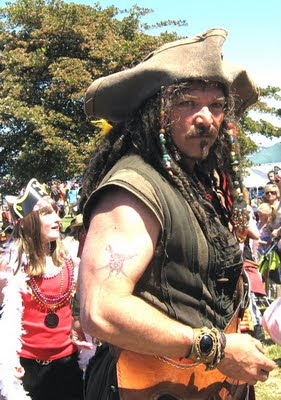 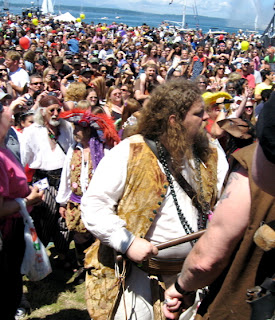 The invaders run to the top of the hill overlooking the shore, with the crowd at their heels. 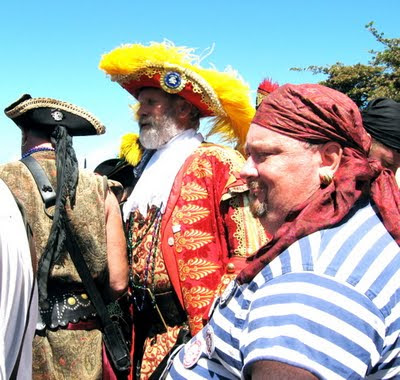 Captain Kidd, in the red coat, and his crew stand at the top of the hill, surveying the crowd below. The Seattle Seafair Pirates, for all their costume and theater, are a benevolent bunch. They toss candy and trinkets to the children below. It's all great fun and something for families to look forward to every summer. All over the Alki neighborhood you see pirate flags, black with white skull and crossbones, attached to fences and stuck in flowerpots, where they will stay through wind and rain and snow until next year's pirate landing -- and new flags can be found.

For more information on the Seafair Pirates, visit their website. There you'll find out about upcoming "raids" at various locations in Seattle throughout the Seafair season. You'll also find out how you, too, can become a pirate. Wouldn't that be fun? Aarrgh!

For more information on what is going on in our West Seattle community, check the West Seattle Blog, hyper-local reporting at its best!

Related post:
Send In The Clowns
Posted by Marie McKinsey at 2:23:00 PM