Picasso and the Divine Feminine

But then something changed my mind. Maybe it was the way my friend described the exhibit. And maybe it was -- the eyes.

With Picasso's personal collection of his work currently on display at the Seattle Art Museum (on loan from the Musee National Picasso in Paris), this photo of him staring out the window is being used as part of the publicity campaign. The first time I saw it, I felt like his eyes locked onto mine. I couldn't look away. And when I did, I knew I had to buy a ticket and go see the exhibit. Even though I had been SO sure I wasn't going to go.

I'm obviously not the first woman to be caught up in Picasso's spell. Almost as well known and studied as his accomplishments as an artist, his relationships with women have been the subject of much speculation and analysis. I will admit that the main reason for me to go to the exhibit was to see how his art was fueled by the power of those relationships.

Years ago, I read a book on sacred sexuality called "Intimate Communion

," by David Deida. It forever changed the way I look at the dance between masculine and feminine energies. Deida's explanation of polarity sheds light on the mystery of relationships, regardless of whether they are heterosexual or same-sex. Polarity is not about "true love," it is about energetic attraction. Like a magnet, feminine energy is one pole; masculine, the other. The more energy is animated at one extreme, the greater the attraction to its opposite. From this perspective, Picasso and his women are fascinating studies. 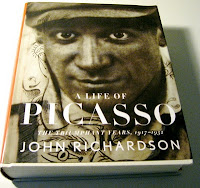 Picasso is an example of masculine energy at the extreme. Focused, aggressive, ambitious, sexual, confident, analytical, on purpose, a master of many crafts (painting, sculpture, ceramics), extraordinarily productive -- and cruel.

's biography of the artist. There's a bit of a smile, more than a hint of charm. The eyes are piercing, taking in every detail, yet cold, detached. He is a man who knows what he wants, which is attractive to anyone with a lot of feminine energy (regardless of gender). But he is that "bad boy" our mamas warned us about. He can and will break our hearts.

And his women? They embodied feminine qualities of beauty, artistry, sensuality and emotionality, at times in the extreme. His first wife, Olga, was a beautiful ballerina with the Ballet Russes. It is said that Picasso fell in love with her the first time he saw her dance. She kept the magic going by refusing to sleep with him unless or until they married. This was a new experience for him - women didn't say "no" to Pablo (see explanation above). Nothing rouses masculine energy like a challenge, but try as he might, she stuck to her refusal.  They married a little over a year later. (Not that he was celibate during that time.) They were very happy in the beginning and his drawings and paintings of her, elegant and representational as they are, seem to honor her formal, traditional taste, even as he was experimenting with new ideas in painting.

After the birth of their son, Paulo, the relationship began to fall apart. One gets the sense that she was fragile emotionally and physically - qualities of the extreme feminine - and that her love of high living wore thin with Picasso's bohemian, workaholic nature. His paintings of her began to take on a more distorted edge.

About that time, Picasso met the woman who would be the next great love of his life, 17-year-old Marie-Therese Walter. Perhaps because of her age and most certainly because of his marriage, his early paintings of her were abstract so as not to give away their secret affair. His famous "Still Life on a Pedestal Table," on view now at SAM, is one of those. How much of his abstract work during those years was inspired by this need for secrecy? Without this catalyst, would he have explored abstract painting to the degree that he did? Over time, her face and body begin to emerge in his work - blonde, blue-eyed, lush, sensual, beautiful. Quintessential feminine.


However happy Picasso may have been with Marie-Therese, he was not cut out to be a one-woman man. In 1936, he began an affair with Dora Maar, a beautiful, talented photographer and painter. Sensitive and high-strung, she was deeply affected by Picasso's moodiness. Whatever sparkle their relationship may have had in the beginning quickly shifted to tears. In Picasso's art, she went from being the beautiful woman you see in the banner above to the famous, "Weeping Woman."

In fact, Picasso did a series of Dora as the weeping woman as if depicting an archetype.  He said, "Dora, for me, was always a weeping woman....And it's important, because women are suffering machines." He seems never to have had empathy for his partners.

Just as today's chefs engage in molecular gastronomy, taking apart the ingredients and cooking processes that create a meal, examining each one and reassembling it, a century ago, Picasso was doing a similar thing with his painting. The Dora Maar images, as well as many of his others, have the sense of having been taken apart, with the facial features, body parts and emotions separated and examined, then reassembled on the canvas.
Picasso's detachment from his own feminine side allows him to observe Dora's pain without feeling it. It is as if he was a disinterested reporter filing a story from a crime scene. He needs Dora's extreme feminine emotionality in order to be anything more than a clever technician. Her drama provides the story. Without it, what shall he paint?

In fact, without his women, I wonder how we would think of Picasso today. There's no question that he would be highly regarded. But without the ability to marry great technical expertise (masculine) with profound emotional depth (feminine), I'm not sure brilliance can be achieved. Picasso's incredible facility with technique of all sorts is not in doubt. But his emotional range appears to have been rather narrow, alternating between periods of tranquility and frequent bouts of rage and self-pity. To bring the full range of human feeling in all its nuance, color, vibrancy, joy and pain, into his painting, sculpture and pottery, he had to borrow the energy from his women.

At the age of 61, Picasso left Dora for Francoise Gilot

, a 20 year-old. Long a well-established painter, he was a mentor for the intelligent, gifted Francoise. Of all his partners, she had the emotional balance to hold her own through his mercurial moods. A talented painter in her own right, she was a keen observer of his creative process and her book, "Life with Picasso

" offers great insight into his life and work.

After 10 years with Picasso, tired of his tantrums and other women, Francoise left him. She told him she was going to leave. He reportedly shouted, "No one leaves Picasso." But she did.
After I saw the Picasso exhibit, I read her book. I can understand a woman being attracted to a man like Picasso, but why would any woman, especially one 40 years younger, choose to live with him? And have two children with him? I found her story thoughtful and fascinating, just as she is.

After Francoise, there were other women and then Jacqueline, his second wife. He continued to be a prolific artist, but his finest work was, for the most part, behind him. However, one particularly profound painting from this time is entitled, "The Kiss." Painted the day before his 88th birthday, it is a self-portrait of Pablo with Jacqueline. There is a look of anguish on both faces. After a lifetime of tumultuous relationships with women, Picasso was, at that point, impotent.
There are 150 pieces in the remarkable exhibit at Seattle Art Museum, and it is well worth your time to see them. But time is running out. The show closes on Monday, January 17. Save money and time and get your tickets online.

If you are not able to visit this exhibit and want to know more about the artist's life and work, check out the DVD, "Picasso: Magic, Sex, Death

,"which is available from Amazon or you can rent it from Netflix. John Richardson, author of a three-volume biography of Picasso and long time friend of the artist, narrates.
Posted by Marie McKinsey at 5:37:00 PM

All text and photos, unless otherwise noted,
Copyright 2010-2020 Marie McKinsey