Last night was the 24th Annual "Figgy Friday" caroling competition held on streets and street corners in downtown Seattle. This event is a fun and festive holiday tradition. It is also a significant fund raiser for the Pike Market Senior Center and the Downtown Food Bank.

I was there, on the corner of 5th and Pine, singing with a group that is now the Olio Glee Club. Because I was performing, I couldn't walk around and take photos, so I asked my friend, Gordon Hjelm, if he would take my camera and get a few shots. He did a wonderful job and all the images you see in this post (except the Macy's star at left) are his. Thank you, Gordon!

We had a total of 35 caroling teams competing along four blocks of Pine St. from 3rd to 7th Avenues. The area was closed to motor traffic during the competition so people could stroll along the street and see the various teams perform. The weather was good - no rain or snow - and everyone, performers and audience alike, seemed to be having a good time. 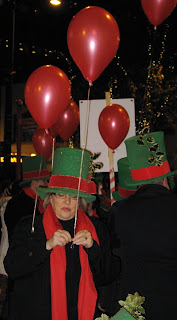 A panel of 14 judges selected the winners in the Best Choral Team and Most Creative Team categories. Members of the audience got to weigh in, too, and vote for their favorites for the People's Choice award. There were also "Figlanthropy" awards for the teams that raised the most money.


Money was raised in various ways. Some singers made personal donations. Some of us found sponsors. At least a half dozen companies sponsored the event. And there were "busker" boxes next to each team during the event where people could drop donations.


I went the sponsorship route and want to say a big THANK YOU to my friends who made donations. Altogether, those checks added up to $170. Outstanding! And much appreciated. 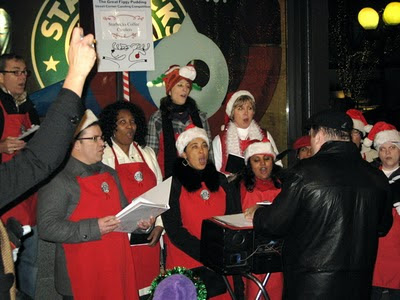 The big winners in the Figlanthropy category, were the Starbucks Coffee Carolers (shown above). Between donations collected by barristas in coffee stores around the area and Starbucks matching dollars, they raised over $31,000! Second place winners were the Phinney Neighborhood Community Chorus. In third place, the Hoppy Holiday, Merry Malty Beer Carolers. 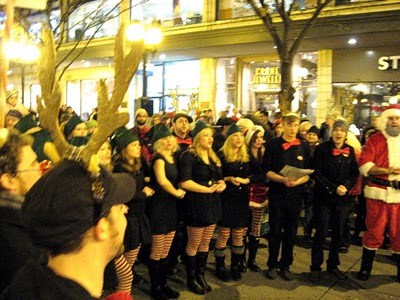 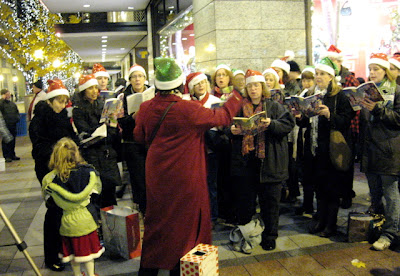 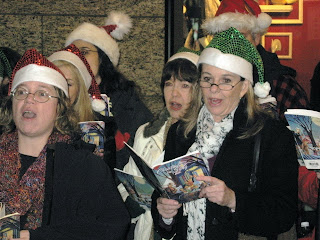 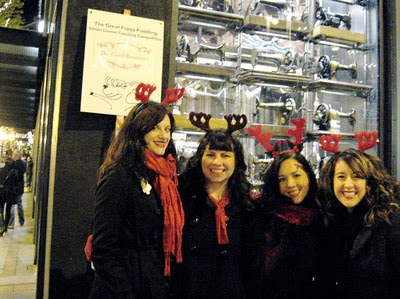 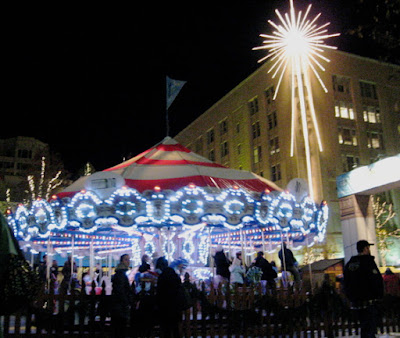 I leave you with this view from Westlake Plaza, at 4th and Pine, across from the Figgy stage. It is a magical scene with the Macy's star shining and children (of all ages) riding the Christmas Carousel.

We had a lot of fun last night and, in the process, helped a lot of people in need - a winning combination all around. Want to join the fun? Plan on coming out next year for the 25th Annual Great Figgy Pudding Street Corner Caroling Competition.
Posted by Marie McKinsey at 5:28:00 PM