I've been reading essays from "Fat of the Land: Adventures of a 21st Century Forager

," by Langdon Cook. Cook is an entertaining writer, and these essays chronicle his various experiences as he hunts for delectable edibles in the wilds of the Pacific Northwest.

Which is to say that he and I have very different ideas about what constitutes a good time. An easy afternoon hike in the woods is fine with me, but I'll pass on anything involving camping, fishing or lugging a heavy pack. (Not to mention free-diving with a kind of slingshot in the icy waters of Puget Sound, hoping to snag a ling cod!) Still, I love eating well and am curious about where our local bounty comes from. So I'm grateful that he is willing to write about his expeditions and that I can tag along vicariously while propped up in my comfy chair.

Beyond comfort, I am also a big fan of safety. And foraging in the wilderness can certainly involve an element of danger, whether from exposure or from taking a bite out of the wrong thing. According to Cook, "Nothing focuses the mind like an activity that might kill you." Which is probably why he has survived to write his essays and post on his blog -- he's pretty focused.

Despite the risks, hunting and gathering certainly has its rewards, as anyone can attest who has had the pleasure of eating wild, foraged foods from around here, including: salmon, huckleberries, oysters, fiddleheads, clams, mussels and mushrooms. Nothing really compares.

And that brings me to my recipe for cream of wild mushroom soup. This is a recipe I adapted years ago from one I found in an out-of-print Weight Watchers cookbook. The original recipe called mostly for those white, tasteless button mushrooms that can be found anywhere, with a few shitakes added to qualify it, I suppose, for the name, "wild" mushroom soup.  It wasn't a very interesting dish until I started adding locally foraged wild mushrooms to the mix.

I was a little timid about doing this in the beginning. Hundreds of mushroom varieties grow in the Pacific Northwest. Some are harmless. Some are tasty. And some are lethal. Unlike Cook and others who take their reference books into the wild and key out their discoveries, I prefer to do my foraging at the local PCC store. In spite of the fact that I am a horticulturalist and can ID hundreds of species of plant life, I feel safer leaving the mushroom harvest to the pros.

(Of course, you might wonder: where do PCC, Metropolitan Market, restaurants and other stores get their supply of wild mushrooms? A recent post on Cook's blog, called The Transaction, explains.)

This time of year, encouraged by the fall rains, mushrooms are beginning to bloom in the woods around us. And my favorites, the chanterelles, are beginning to show up in the produce department. 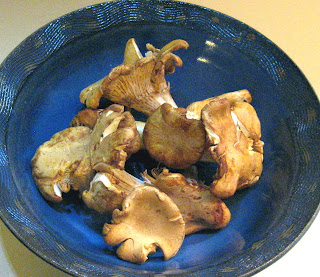 Rich in color and flavor, these beauties elevate my humble soup to something magnificent. 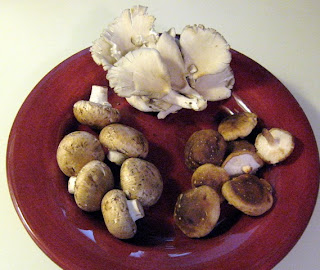 Among other mushrooms you might add to this soup are these, from left: crimini, also called Italian browns; oyster mushrooms; and shitakes.

As with most of my cooking, I am not very precise in my measurements. When I buy mushrooms for this soup, I am aiming for 4 cups total of chopped or sliced mushrooms. Depending on cost and condition, that mix might lean a little more toward one variety than another. For me there are only two constants: chanterelles must be in the soup, and only fresh, never dried, mushrooms will do. 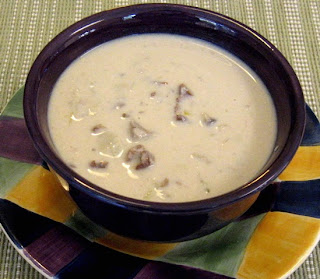 Melt the butter in a large saucepan or soup pot.
Add the mushrooms, leeks, and garlic. Saute over medium high heat for 3-4 minutes, until leeks and mushrooms have begun to soften.
Sprinkle the flour over the mix and stir quickly to coat.
Add the milk and broth, stirring continuous to prevent lumps.
Add remaining ingredients, stir to combine.
Bring the soup to a simmer. DO NOT let it come to a boil, because the milk will separate and ruin the creaminess of the soup.
Simmer about 25 minutes, stirring occasionally.
Serve with a sprinkling of chopped parsley on top, if desired.

This soup tastes decadently rich, but is probably less than 200 calories per serving (the original recipe, which called for margarine, not butter, was 123 cal/serving). The richness of this dish comes from the mushrooms.

Some of my friends love this dish so much, they call it THE Soup. To me it is one of the best flavors of fall and a simple celebration of the riches of our region.