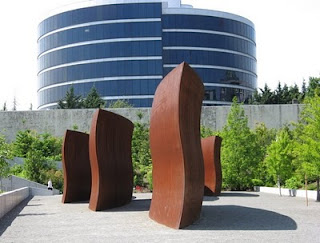 My favorite installation at Seattle Art Museum's Olympic Sculpture Park is Richard Serra's "Wake." In the photo above, you can see four of the five undulating metal pieces that comprise this sculpture, each 50 feet long and 14 feet high. Walking alongside and between these metal structures, I can almost feel the bow of a ship slicing through water - a thoroughly fitting image for the maritime legacy of Seattle, and for the park itself, perched as it is at the edge of Elliott Bay. 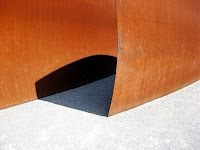 This installation is a photographer's dream, with light and shadow creating shapes that move and extend the form of the sculpture. 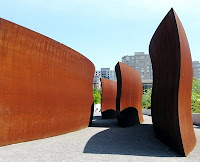 For me, this is a thoroughly engaging work of art. But with all due respect to Richard Serra, part of the success of the installation is the way it is situated in the park. As you see in the photo at the top of this post, the unusual round building north of the park, once home to Airborne Express, provides a unique, sculptural backdrop for the "Wake." If you have never been to the park, you need to know that the view you see in the photo is the main approach to this artwork. From the Visitor's Center you walk down a long set of stairs and before you stands the Serra sculpture in the foreground, the AE building in the background.

This is a good example of what we landscape designers call a "borrowed view." That round, bluish building isn't part of the sculpture park, but its size, shape and position enhance the views there all the same. (Another great example of a borrowed view is just to the west of this area, where the Seattle Post-Intelligencer's classic globe, just outside the northwest corner of the park, is a perfect complement.) 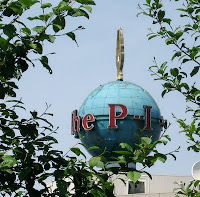 OK, now imagine, if you can, that the round, blue, AE building is no longer visible because between it and the park there looms a large, ordinary, rectangular office building. I think you would agree that the view would be forever changed, and not in a good way. And even if you can't visualize that scene, I'm sure you can imagine that the proposal of such a development is creating a controversy.

At the center of this controversy is Martin Selig, owner of the property adjacent to the Sculpture Park and a well-known Seattle developer. Love him or hate him, Selig has left his mark on this city. Perhaps his best known project is the tallest building in Seattle, formerly known as the Columbia Tower. The views from its 76th floor banquet and meeting rooms are utterly spectacular, as is the view from the ladies' room (there's nothing quite like answering nature's call while enjoying a panoramic view of Lake Washington, downtown Bellevue, and, on a clear day, the Cascade Mountains).

To his credit, Selig has not proposed anything for the site next to the sculpture park that comes close to the scale of the Columbia Tower, but he did ask the city to approve a 14-story apartment building, a structure that many agree would be completely out of scale for that site. After meeting with opposition from local residents, and being literally sent back to the drawing board by the city, Selig has changed his plans. He now proposes a 7-story office building, a scaled-down structure to be sure, but still nearly 30 feet taller than zoning allows. Opponents are holding their ground (so to speak), insisting that Selig work within existing zoning requirements. The city's Downtown Design Review Board is scheduled to make a decision on Selig's revised plan on July 27.

While I am eager to hear what the board has to say about the revised plan, I have to say that the person I would be most interested to hear from right now is Richard Serra

. Not one to mince words, he told writer Jen Graves in an interview for "The Stranger" just after the "Wake" was installed, that "architects can be a pain in the ass." He describes most American sculpture parks as "parking lots for sculpture." But he was very enthusiastic about the Olympic Sculpture Park. "To have a park that is accessing the language of sculpture is not only rare, it's fucking magnificent," he declared.

Wouldn't you just love to hear what he has to say about this office building?
Posted by Marie McKinsey at 10:19:00 AM Links to this post

While parts of the country sweltered last month, we had another "Juneuary" in Seattle. I say "another" because they aren't that rare. You can see a graph showing June temperatures from 1957 to the present on Cliff Mass' weather blog.

So odd as it might seem to people elsewhere, June was a good month for Seattleites to enjoy a nice, hot bowl of soup. Inspired by the weather, a friend of mine went on a soup-making binge and was good enough to give me a container of her French onion soup. As she handed it to me, she gave me instructions for preparation: the bread, the cheese, etc. I nodded, fully intending to do just what she suggested.

But when the time came to eat the soup, I was busy, hungry and didn't feel like going to the store. I looked around at what I had: a stale baguette, some shredded Parmesan cheese and fresh herbs from my garden - and decided to make a batch of crostini. 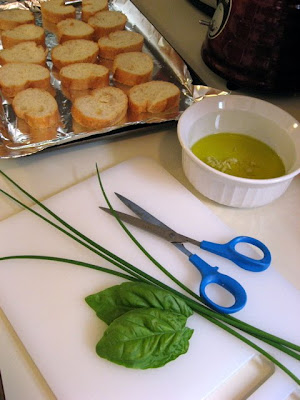 I think homemade crostini is much better than anything you can buy and there's nothing easier to make.

Heat your oven to about 350F. Slice the bread and arrange on baking sheet. Put the olive oil into a small bowl, add the garlic and a bit of salt, perhaps 1/2 - 3/4 teaspoon. Cut the herbs into fine a dice, add to the olive oil. Whisk it all together.

My knife skills being what they are, which is to say, not very good, I use a garlic press for any recipe, like this one, that calls for anything finer than a rough chop. For finely chopped herbs, I use scissors. I take large-leafed herbs, like basil and parsley, and break the leaves into pieces into a small ramekin, then use the scissors to cut them up into very small pieces. For me, this technique is quick and easy and the ramekin keeps little bits from escaping across the counter.

OK, now you have your oil, salt, and herb mixture. Use a spoon to spread it evenly over all the pieces of bread. Sprinkle the Parmesan over the bread. Bake for 12 - 20 minutes, depending on how fast your oven is. You want the crostini to be toasted, not burnt, so keep an eye on them.

These are great floated in a steaming bowl of French onion soup. They are also good with my Red Soup, for a different twist on the classic tomato soup and toasted cheese sandwich idea. Enjoy! 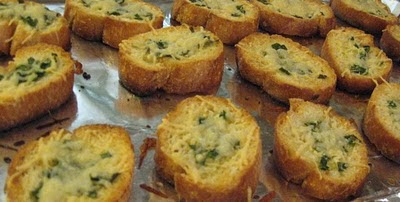 Posted by Marie McKinsey at 3:56:00 PM Links to this post