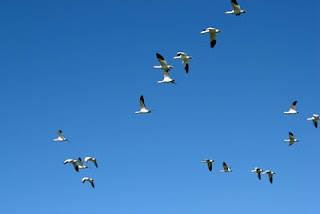 According to the calendar, it is still winter, but here in the Seattle area, yesterday sure felt like spring. It was sunny, temperatures close to 60 degrees, trees in bloom everywhere. It was the perfect day for a little road trip and, lucky for me, I had a destination - the Style Show at the Museum of Northwest Art in La Conner, Washington. My friend, Kelly Lyles, was an exhibitor, and she and another friend involved with the event had invited me to attend.

So I tossed my trusty little Canon PowerShot

into my purse, loaded Songs in the Key of Life

into my CD player and headed north on I-5. La Conner is located in Skagit County, about 75 miles from Seattle. When you exit the freeway up there, you drive at least 10 more miles to the west, along picturesque roads that wind through farm fields to reach the town. As I rounded a bend on one of these roads, I saw a field covered in white to my right.
If we hadn't had so much warm weather lately, I would have assumed it was a late winter snow. But whatever snow we had in the lowlands this year has long since melted. As I got closer, I realized what it was - the field was covered in birds, hundreds and hundreds of them. 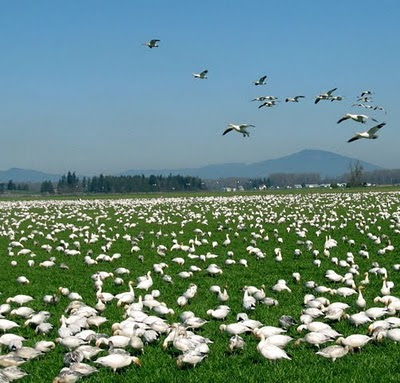 I had forgotten that this area is part of the migration path for many birds, in this case, snow geese. These birds overwinter in the Skagit Valley, foraging and building their strength before the journey to their nesting grounds in the tundra of northernmost Canada. For more details on these amazing birds go here. I pulled over to take photos, fascinated by all the activity: birds milling about feeding on insects, seeds, whatever, while others flew overhead. What a sight! A road trip bonus, for sure.


Then it was on to the MoNA Style Show. The museum, upstairs and down, was filled with artist's booths, each featuring some kind of wearable art or items for the home - jewelry, jackets, sweaters, dresses, hats, pillows, ceramics, and Kelly's matchbox car necklaces and humorous paintings. Beautiful items everywhere. Great color and design. A visual treat.


One section consisted of art pieces created with the theme: Lingerie. (Unfortunately, photography was not allowed in the show, so you will have to rely on my memory of some of these, plus your own imagination.) There were some great interpretations on this theme, including a sort of long-line corset made of basketry. There were a couple of diaphanous gowns, one trimmed in vintage lace and tatting, that looked as though they had come from a dream. There was a classic, black bra with gold embroidery, that I thought kind of went with my shoes. And a painting called "Sky Slip," which was the image used for the show publicity posters. All of these items, and more, were offered in a silent auction, so there were lists of bidders and bids posted by each one. Next to a bra and panty set, studded with scary looking spikes, someone had written in the names of "bidders:" Madonna and Lady Gaga. That got a laugh.


After a late lunch, it was time to head back toward Seattle. I took my time, though. It was too pretty a day to be in any hurry. This area is home to the annual Skagit Tulip Festival, which usually takes place throughout the month of April. There are several spring bulb producers here, including Washington Blub Company, the largest in the US. With spring arriving early this year, I wondered if I might find a field or two already in bloom. And I was not disappointed. 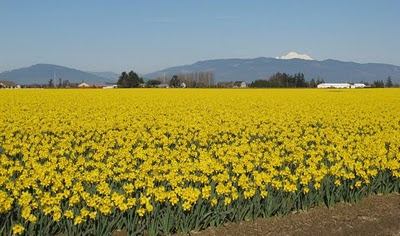 Just a few miles from La Conner, heading toward Mt. Vernon, I spied this sea of yellow daffodils. (That's the snowy peak of Mt. Baker barely showing above the coastal mountains in this photo.) 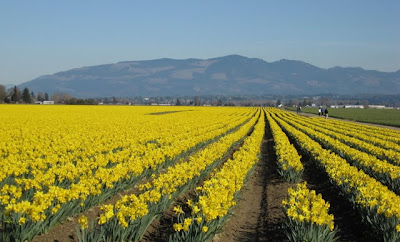 Daffodils always make me happy. Partly because of their sunny disposition. But mostly because they remind me of my son, Mike. His birthday is in a few days and no matter where I live, it seems that daffodils are always blooming on that day. (He is in the Navy and underway at the moment, so I emailed him some daffodils via digital photography this morning.)


On the way home, I missed the worst of the southbound traffic on I-5 by skipping over to Highway 99 at the north end of Seattle. This route comes south alongside downtown with great views of the city on the left, of Elliott Bay and Olympic Mountains on the right and, on a clear day as yesterday was, straight ahead you see majestic Mt. Rainier rising above it all. What a view! It was the perfect ending to a perfect little road trip.
Posted by Marie McKinsey at 2:10:00 PM