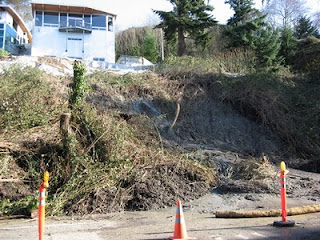 There was a mudslide in our neighborhood about a month ago. Seattle is a hilly city and after heavy rains, there's a good possibility that one of these will happen. This isn't a very big slide, compared to those I've seen in the 20 years I've lived here. Fortunately, mudslides are less frequent these days, partly because we're  better at managing slopes and partly because the most precarious ones have already given way.

Since this happened, I've heard the usual grousing from people claiming that slides are caused by cutting down trees on slopes. There's a widespread belief that trees preserve slopes, and at one time, I believed that myself. But as a horticulturalist, I have learned that the relationship between trees and slopes is more complicated than that.

When I completed my degree in environmental horticulture and landscape design and began my consulting practice here, the consensus was that, next to water, development was the greatest enemy of slopes. It was also believed that the best way to prevent erosion and mudslides was to leave slopes covered in native vegetation (which at the time included, ironically, a large immigrant population, i.e., English ivy, Scotch broom and Himalayan blackberry). To keep slide activity to a minimum, the city enacted strict building codes which applied to all development in slide prone areas. On top of that, the city went a step further, buying up land in some of the steepest slope areas to assure that they would remain in a "natural" state and, thus, be unlikely to slide.

It seemed like things were under control. And then came the winter of 1996-97, when we had nearly double the amount of our usual rainfall, resulting in dozens of mudslides. You can read the USGS report here. For those of us in the horticulture business, one of the most disconcerting observations about these slides was that so many of them happened in those natural areas that we believed would be less likely to erode than those with new construction. In event after event, we saw mountains of vegetation, including big trees, whose root systems we thought would stabilize the slopes, slide away, taking huge swaths of hillside with them. We were left to wonder, what happened here?

To get answers, the city commissioned the Seattle Landslide Study, a detailed report that covers the geology of the area, individual slide prone areas, specific landslide events and their causes, and improvement recommendations. (If you are considering buying property in Seattle near a slope, you might want to review this report first.) Although most of the report focuses on water and geology, it has this to say about vegetation and tree problems on slopes. Along with the city's efforts, the landscape industry also stepped up its efforts to understand the relationship between vegetation and slopes and offer continuing education to keep professionals up to date.

So what have we learned about trees and mudslides? First of all, we know now that tree roots do not bind layers of soil together, as we once believed. They stay in that first or outer layer of soil and do not penetrate into the clay under that.

Trees do not grow, as we were taught in grade school, like "dumbells" with the root system a mirror image of the canopy. Mature trees do not have tap roots. Tree roots are shallow, usually only about 6" to 24" deep, and they run much further than the dripline: root systems extend as wide as 2-6 times the height of the tree.

On a slope, tree roots will grow up, down and side to side just under the surface of the soil, creating a mass of material that acts like netting. As long as the slope is relatively dry, the roots help hold the soil particles together. But when the soil becomes saturated with water and takes on the consistency of a smoothie, these root systems, which are not anchored to the clay below, have nothing to hold onto. And so they slide, as we have seen over and over, taking with them a wide swath of hillside caught up in their roots. 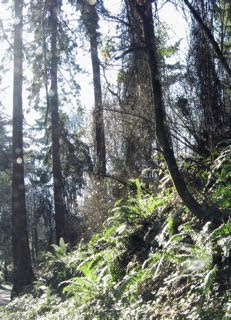 Sometimes the slope moves just a little bit, not enough to fully slough off, but just enough to tip some of the trees forward. If the slope remains stable for some time after that, the trees will turn and grow upward toward the sun, giving their trunks a characteristic curve, as you see on the right in this photo. These "pistol butt" trees or "trees with knees" are a clue that a slope has a history of movement - good to know if you plan to live near there. 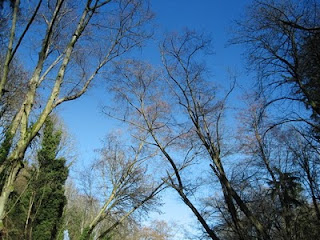 In some cases, trees can cause a wobbly slope to slide.

I shot this photo standing in the middle of a road that runs between two steep slopes. Look at the way the trees are leaning. If you remember that their roots are shallow, it's easy to see how top heavy they are. If the soil starts to get soft, the weight of their trunks and branches will pull them right over and their root systems will pull  big chunks of the hillside down along with them.

So you see, the relationship between trees and slopes is a bit complicated. Trees can help to stabilize slopes, except for when they don't. In general, if trees are standing nice and upright, they are part of the solution. If they are leaning, they are part of the problem. And that neighbor of yours who cut down trees on his slope? Well, he might actually have protected the slope from sliding in the near future, provided that he left the stump and roots intact.