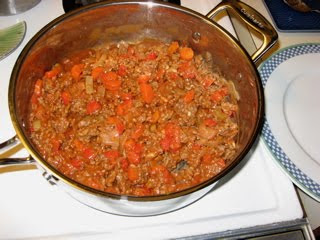 My Dad used to make up words. It was just part of his whacky, Scots-Irish sense of humor. Until recently, I thought the word  "Slumgullion" was one of his creations. It was the word he used to describe the kind of dinner you make when you look in the refrigerator, grab some left overs, brown some hamburger, chop some vegetables, combine them all in a pot and hope for the best.

The ingredient list varied, except for one thing. There was always ground beef in the Slumgullion. Sometimes it was pretty good and sometimes it was just something to eat. What it always was, was quick and easy.

This week I decided to make a version of Slumgullion, partly because I was in the mood for it and partly because I was thinking of Dad. He would have been 95 this week. While "dinner" was simmering, I decided, on a whim, to google the word "Slumgullion." I was astonished to find that Daddy didn't make this dish, or the name, up! Here's a list of recipes.

In the version shown above, I have the usual ground beef, plus garlic, onions, carrots, red bell pepper, lots of celery, a dash of yellow mustard, tomato sauce, salt and pepper. Topped with some grated cheddar - it's dinner. But you certainly don't have to stick with those ingredients. If you check out other people's recipes, you'll find that just about anything goes. Some people use lamb instead of beef. Some people include corn, green beans, peas, green pepper and other vegetables - which I do, too, at times, depending on what's in the fridge. Some people add starches, like macaroni or mashed potatoes.

This isn't anything special. It's just ordinary comfort food. But it has its place at the table. Thanks, Dad. Even if you weren't the guy who invented the name, Slumgullion, I still love you.